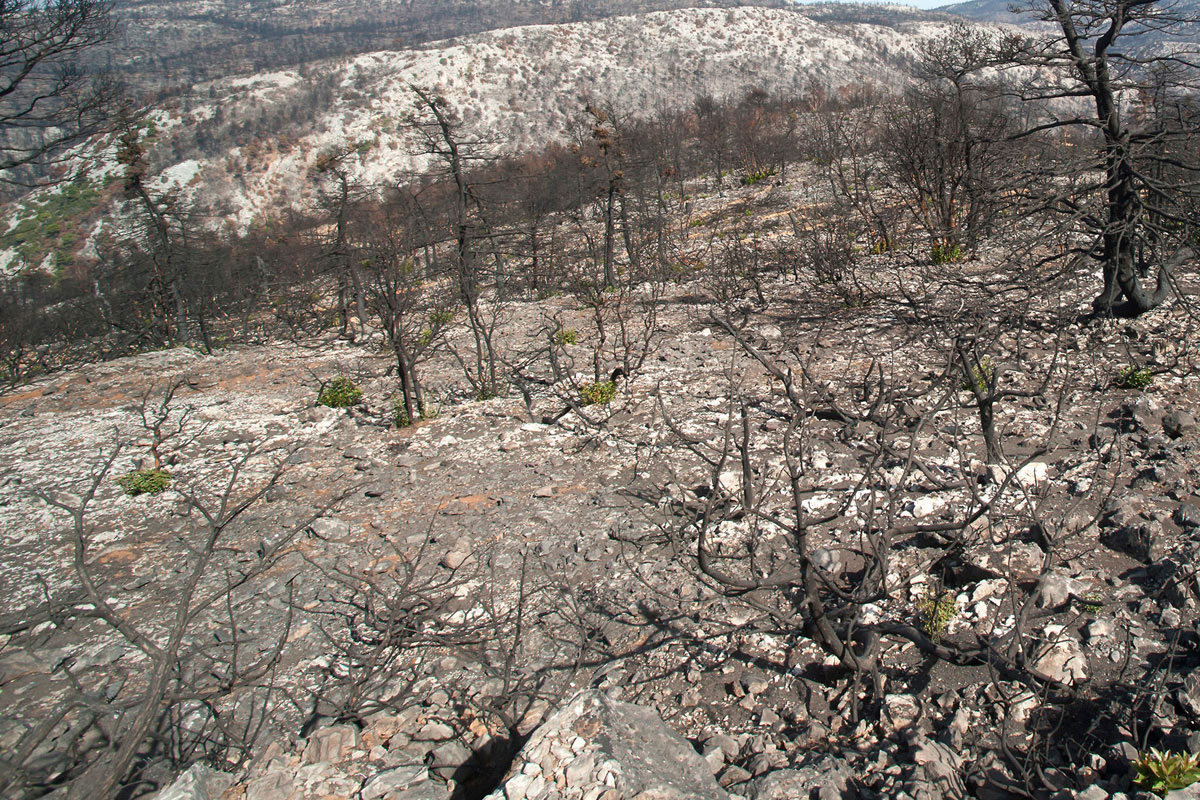 The mountain grasslands of Mt. Oiti and Mt. Kallidromo used to be grazed, mainly by sheep and goats and traditional grazing practices were applied, including movement of cattle to different locations, burning of shrubs or cutting of thistles at the end of summer, etc. In the core zone of the Oiti National Park, grazing was prohibited approximately 40 years ago; it is still practiced, though reduced, in the peripheral zone. On Mt. Kallidromo grazing by sheep and goats used to be intense until 15–20 years ago, but today only cattle are present, and grazing is also reduced. As a result of the reduced grazing pressure and of the abandonment of traditional practices, shrub encroachment has taken place in both sites: shrubs, mainly prostrate Juniperus nana, have penetrated the grasslands and induce the regeneration of the endemic Greek Fir (Abies cephalonica). This forest expansion threatens the vital space of both the mountain grasslands (habitat types 6210*, 6230*) and the temporary ponds (habitat type 3170*) located within them. The characteristic temporary pond plants (such as Ranunculus lateriflorus and Veronica oetaea*) are threatened by the elimination of grazing in two ways. It may lead to an increase of their competitors (as it apparently happens at the pond of Souvala on Mt. Kallidromo) and it may affect germination (buried seeds are not exposed). Also, leaf deposition and decomposition cause the build up of a deep layer of soil and litter, which may provide an inhospitable substrate.

It is obvious that conservation of biodiversity at species, habitat and landscape level in the project sites requires control of forest expansion by the application of grazing management regimes and possibly of other techniques (see action C.3 and also action C.1) appropriate for the conservation of both forests and forest openings. Where necessary, biotic community restoration interventions will be applied (actions C.2 and C.4).

Intense forest exploitation and management cause habitat deterioration, resulting in decrease of nesting sites and prey availability for the Tengmalm's Owl. Additionally, the three woodpecker species (Black, White-backed and Grey-headed) are threatened by the decrease of nesting sites and food resources (mainly wood-boring insects), due to intense forest exploitation and management, which is characterised by the removal of older trees and dead wood. The project aims to address these problems mainly by action C.8 and also by the precautionary action C.6.

Threat 3: Modifications of the hydrological cycle of the temporary ponds

The characteristic flora (including the priority plant Veronica oetaea*) and fauna species of the temporary ponds (habitat type 3170*) are very sensitive to modifications of the hydrological cycle, since the completion of their life cycle is depended upon the regular alternation of wet and dry phases. On the other hand, the presence of water is critical for the breeding success of the Rock Partridge. The hydrology at the Leivadies plateau on Mt. Oiti has certainly been altered, while erosion is apparently a cause of sedimentation on Mt. Kallidromo; it is possible that additional minor modifications have taken place, too. The project will address this threat by investigating and restoring, where necessary, the hydrological cycle (actions A2 and C.4). Where necessary, biotic community restoration interventions will also be applied (actions C.2 and C.4).

Trampling by off-road vehicles is frequent in both the mountain grasslands (habitat types 6210* and 6230*) and the temporary ponds (habitat type 3170*) of Mt. Oiti and Mt. Kallidromo and has intensified during the last decade. In addition, the route from Eleftherochori village to the Nevropolis pond on Mt. Kallidromo is included in the itinerary of the Rally Acropolis. Trampling by heavy vehicles causes structural damage of the plants and, moreover, compaction of the soil, making it unsuitable for the development of the characteristic temporary pond species. Trampling caused by camping is less frequent but is also a source of vegetation degradation. The project will address this threat by the actions A.11, C.1, and E.1.

Illegal waste disposal (fly-tipping) is frequent on Mt. Kallidromo, especially around the seasonal ponds, and less frequent at the recreation sites of Mt. Oiti. Furthermore, the litter-bins placed within the target habitats or at the recreation sites are generally far from the usual itinerary of waste collection trucks and hard to reach, and they occasionally overflow, especially after national holidays and the organisation of events. In such cases, the accumulation of waste leads to leaching, which results in soil and water pollution affecting the mountain grasslands and, mainly, the temporary ponds. Pollution may lead to eutrofication, which, as it has been observed, may drive away the characteristic temporary pond species. The project will address this threat by actions C.1 and E.1.

Wild fire incidents have a lower frequency and usually extend over smaller areas in the project sites of Mt. Oiti and Mt. Kallidromo, compared to those of low altitude areas with inflammable Aleppo Pine (Pinus halepensis) forests (for example, in the 1990s some 350 ha were burned on Mt. Oiti, compared to tens of thousands ha in low elevation areas of Central Greece). On the other hand, the mountain conifer species Pinus nigra subsp. pallasiana and Juniperus foetidissima are not adapted to fires and do not possess a post fire regeneration mechanism. Recovery after fire is slow, and may be hard if the fire is extensive and there remain few or no surviving mature trees with cones. Thus, even small range and non-frequent fires may cause difficult to restore damages in the forests of Pinus nigra subsp. pallasiana (habitat type 9530*) and Juniperus foetidissima (habitat type 9560*). Moreover, fires result in denudation of the slopes and increase of erosion, which in turn increases the threat of sedimentation at the temporary ponds (3170*). Finally, fires threaten with habitat destruction the forest species targeted by the project: the three woodpecker species, the Tengmalm’s Owl and the Brown Bear. The project will address this threat through fire protection measures (action C.6) and by decreasing the risk of accidental fires (actions C.1, E.1).

There are controlled hunting areas in both Mt. Oiti and Mt. Kallidromo. However, the number of hunters in the surrounding region is quite large and there is occasional illegal hunting on Mt. Oiti and frequent illegal hunting and poaching on Mt. Kallidromo. Additionally, the mass releases of captive-bred Chuckar Partridge (Alectoris chuckar), have resulted in the loss of genetic purity and depression of genetic fitness of certain Rock Partridge populations. The population of the Rock Partridge appears to be declining rapidly in recent years on Mt. Oiti and is threatened on M. Kallidromo. The project will address these threats in cooperation with the Stakeholder Committee (action F.2) by education and information activities (E.1) and by the inclusion of relevant provisions in the legislation for the sites (action C.10).

Producers (farmers, livestock breeders, bee-keepers), in order to protect their property are occasionally tempted to kill Brown Bears which they consider responsible for the damages. Poaching is an additional threat. The project will address these threats by actions C.9 (preventive measures) and E.1 (public education) so as to reduce conflict between bears and humans.

All the habitats targeted by the project are high altitude habitats and threatened by climate warming. The temporary ponds (habitat type 3170*) are more vulnerable since they are wetland habitats. The project with attempt to address this threat both by restoring the biodiversity of the biotic communities (actions C.1, C.2, C.3, and C.4), by establishing an ex situ seed-bank (action C.7), and by investigating and restoring, where necessary, the hydrological cycle (actions A2 and C.4).

For the Tengmalm’s Owl, the Black Woodpecker and the Grey-headed Woodpecker, Greece is the southernmost limit of their distribution in Europe. Therefore, their populations are susceptible to site environmental changes due to global climate change. The project will address this threat indirectly, by reinforcing their breeding success and by preserving their food resources (action C.8), so that they will be better able to cope with environmental change.