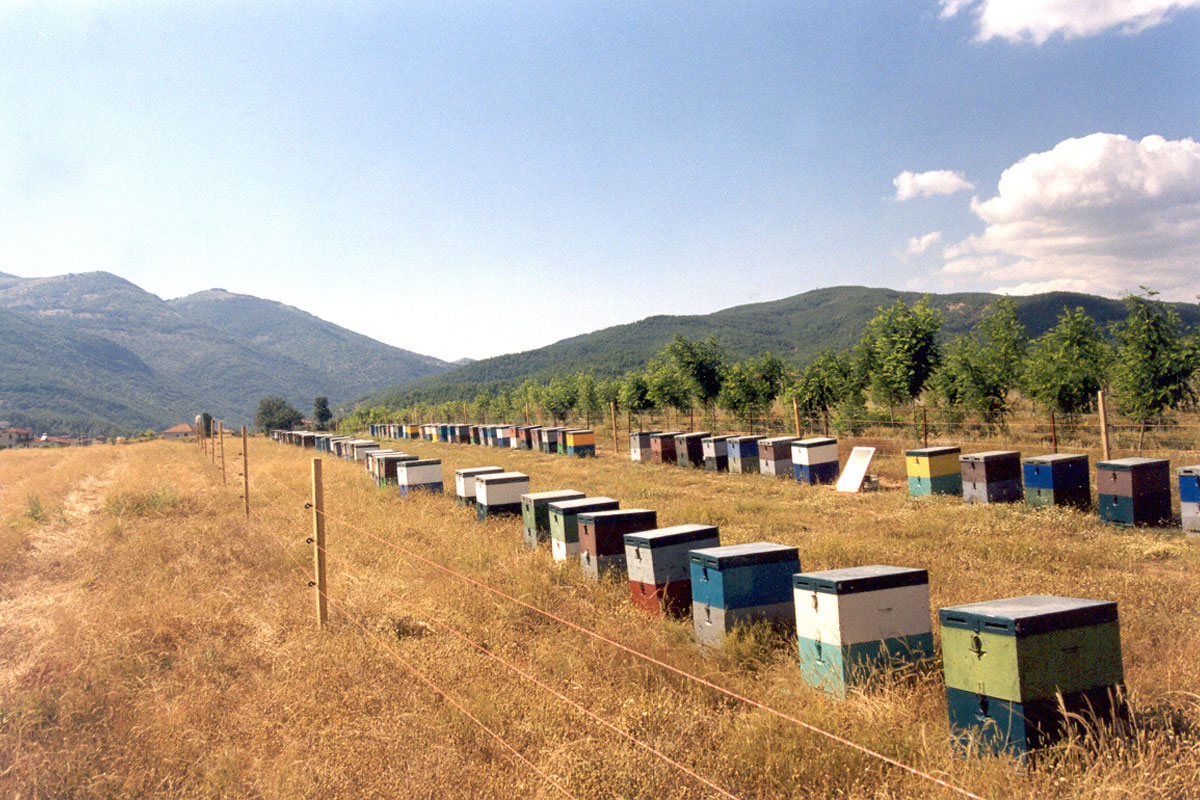 The purpose of this action is to verify the presence and population dynamics of the Brown Bear, to expand the area of its occurrence and to minimize conflicts and confrontations with local stockbreeders and beekeepers.

This will be achieved by the application of new forestry practices aiming towards preservation of protected corridors for the species, by the conservation and enrichment of food resources (native fruit trees), by an extensive education campaign aimed at local stakeholders (mainly stockbreeders and beekeepers, but also loggers and hunters) to increase awareness and educate them about the value of bears, and by providing, free of charge, electrified fencing for apiaries and Hellenic Livestock Guarding Dogs (LGD) to stockbreeders. The actions will start during the second year of the project. The locations where the action will take place cannot be foreseen accurately, since they will be specified by the results of action A.10. Protection and enrichment of fruit trees is intended to take place within the boundaries of the sites GR2440004 and GR2440006 (see map 9).

There will be three axes of the conservation interventions, dependent on the specifications provided by Action A.9:

The education campaign will include publication of a leaflet and posters and three educational seminars for the local stakeholders.

The most appropriate way to minimise damage from bear raids is to prevent them. An efficient method to prevent Brown Bears from causing damage to apiaries, and therefore to reduce human-wildlife conflict, is the placement of electrified fences to protect the produce. The fence consists of a network of parallel wires, all live, supported on metal or wooden stakes and connected to an automatic feeder with automatic voltage control. The power source can be solar panels or a car/tractor battery. When the bear touches the fence it receives an electric shock, forcing it to leave the area without causing any damage to the apiary. The effectiveness of the four-wire electric fence has been proven satisfactory against bear raids.

Guard dogs are used traditionally as an effective deterrent of big carnivores, like bears and wolves. In Greece, the Hellenic Livestock Guarding Dog (LGD) has been protecting livestock in mountainous areas for centuries, and constitutes part of our natural and cultural heritage. It is admirably adapted to the natural conditions of the Greek mountains and it is the optimum method to prevent damages on breeding stock from wild animals. The above actions will be conducted during the third and fourth years of the program for both Mt. Oiti and Mt. Kallidromo forests, and will be reassessed and modified according to the monitoring results.

Note 1: Regarding the recorded observations of brown bears in the project sites, these sites represent the most southern area of reappearance of bears in Greece. The latest confirmed report of the brown bear on Mt. Oiti was in 2008 when stockbreeders there mentioned damages to their livestock by a bear. Since then, ARCTUROS have received several reports about bear presence in the area in 2009 and 2010 from reliable sources. However, as there has been no project in the area, these reports have not been confirmed in the field. Action A.10 aims to verify these reports. The report from Oros Kallidromo (2009) is oral and unconfirmed in the field. However, in recent years there are strong indications of range expansion of Ursus arctos* to the south from the Central Pindus population. Therefore it is highly likely that, in the years to come, bears will have a permanent presence in the area.

Note 2: Action A.10 may indicate that it is advisable to implement part of action C.9 outside but close to the boundaries of the Natura 2000 sites. In this case the advice of DG Environment regarding the eligibility of the action will be followed. If it is deemed eligible, because it will affect positively the animals within the Natura 2000 sites, we will proceed to implement part of action C.9 outside the boundaries. If it is deemed not eligible, we will find alternative locations within the boundaries.

Note 3: Regarding the applicability and acceptance of electric fences and guard dogs by stakeholders, ARCTUROS already has experience in the area. Through a project supported by the Ministry of Environment (EPPER 2008), titled "Awareness campaign for the bear with emphasis in the reappearances areas”, ARCTUROS has organised two workshops with state authorities, ELGA (the Hellenic Agricultural Insurance Agency), and stockbreeders in the Environmental Education Centres of Ypati (in the project area) and Karpenisi (outside but near the project area to the northwest, in the prefecture of Evrytania). The conclusions of these workshops showed clearly the need for further actions because of the damages caused by bears and wolves. Throughout Greece, farmers have been persistently asking for protection of their herds and crops. This has been confirmed in all the areas where ARCTUROS has been actively involved. The ARCTUROS Centre for the Reproduction of Hellenic LGD has received about 1,000 requests from breeders asking for guard dogs. Also, beekeepers, through their Central Federation, have been persistently asking the Ministry of Rural Development and Food to subsidise electric fencing, through agro-environment funding, as the most reliable measure of protecting their apiaries. All farmers in the project area face significant financial difficulties, especially during the ongoing crisis. Under such conditions, the damage caused by carnivores can represent an economic loss that should not be underestimated.

Note 4: ARCUROS has implemented or is implementing 7 LIFE projects related to the Brown Bear in Greece, but all of them were focused in the regions of Anatoliki Makedonia, Thraki, Kentriki Makedonia, Dytiki Makedonia, Thessalia and Ipeiros, well to the north of the proposed project sites of Mt. Oiti and Mt. Kallidromo. The measures proposed in action C.9 have been implemented in the framework of LIFE03 NAT/GR/000089 and LIFE09 NAT/GR/000333 in Dytiki Makedonia and Ipeiros. They proved quite effective, to the point that the Ministry of Rural Development and Food decided to include them as agro-environmental measures in the National Programme for Rural Development. Unfortunately they have not been implemented yet. Within the latest Programme for Rural Development framework, the Greek Livestock Guard Dogs are not eligible for subsidy, while no funds have been allocated for electric fences. Under the current conditions, there is little chance that they might be implemented in the near future.

The proposed actions will significantly promote the symbiosis of man and bear in the project sites where no other conservation measures for Ursus arctos have been implemented.

The environmental education project will increase awareness and educate local stakeholders about the value of bears and biodiversity conservation, as well as about the benefits that can be derived from it. The protection and enrichment of wild fruit trees will increase food availability, thus providing a invaluable resource for bears during the critical period prior to winter. The prevention of damage to apiaries and livestock, through the use of electrified fencing and Hellenic LGD will considerably reduce the motive of locals to kill bears for protection or retaliation. Both measures have proved reliable as a prevention policy and there is considerable demand for them by stockbreeders and beekeepers.

Since 2005, ARCTUROS has repeatedly visited the project sites and received information and complaints from residents of Pavliani village about the presence of bears and damages to beehives. There has been only one incident of mortality recorded in the area, but the corpse was not found. Otherwise, there have been 2 confirmed incidents in the adjacent prefecture of Fokida. There is information (from ELGA of Lamia) about recent losses of domestic animals caused by bears in the nearby Mt. Agrafa. On the other hand, loses from wolves are common in the project sites, especially in the villages of Marmara and Kolokythia (ELGA compensated for 68 sheep and 1 cattle in the Oiti area in 2011). The support of the local stockbreeders with Hellenic LGD will benefit both the priority species Wolf and Brown Bear. Damages to apiaries have been recorded in the Pavliani area (2005) and also in the adjacent Fokida region. Mt. Oiti is indicated as the southernmost area in Greece with damages of apiaries by bears in a scientific publication about bear-human conflicts, with analysis of 1999-2006 ELGA data. 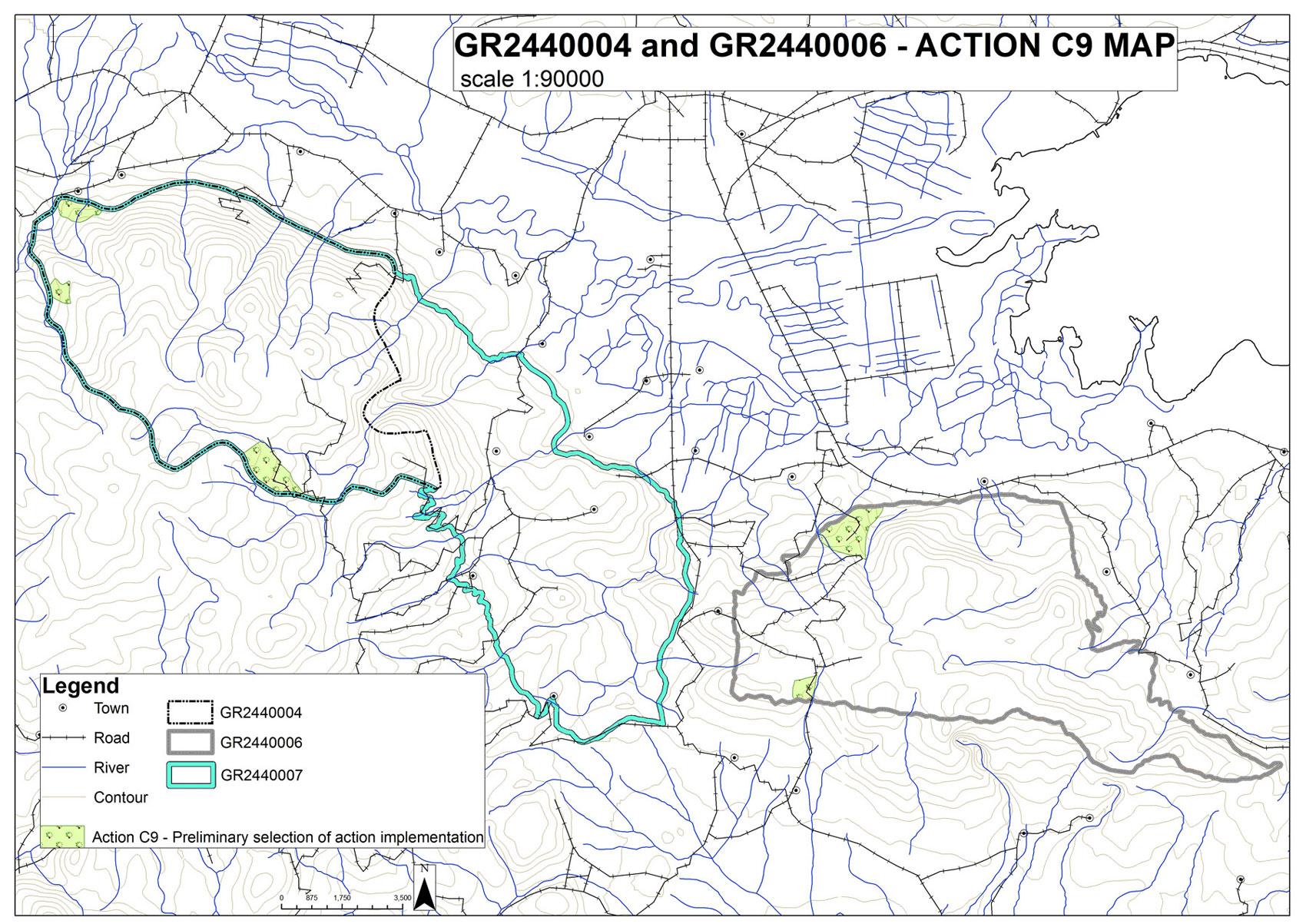