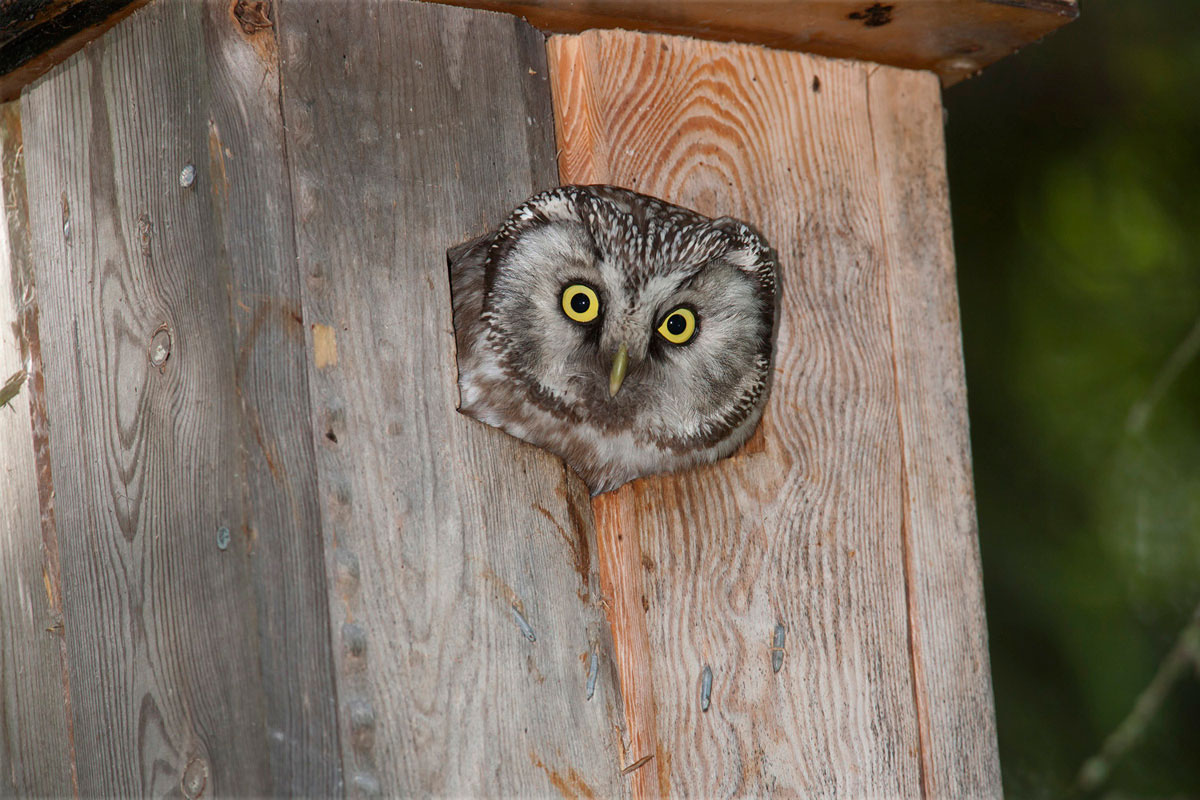 The purpose of this action is to increase population size and expand the area of occurrence of Alectoris graeca Dryocopus martius, Dendrocopos leucotos, Picus canus and Aegolius funerus. This will be achieved by the installation of artificial nests for the woodpeckers and the owl; by the application of new forestry practices aiming towards preservation of nesting and feeding sites, as well as of food resources; and by the management of mountain grasslands and of selected rocky sites for Alectoris graeca. The action will start during the second year of the project.

There will be two axes of the conservation interventions, dependent on the specifications provided by action A.9:

Preservation of nesting sites can only be achieved through protection of older trees, because all three woodpecker species require a rather large tree diameter for nesting. Aegolius funerus is dependent on natural cavities, found usually in older trees, or abandoned Dryocopus martius nests, which are of sufficient size. Mature trees, appropriate for nesting, will be located and marked, to prevent felling in the future. Forest tracts bordering torrents and streams are of particular interest for woodpeckers, since deciduous trees often appear there mixed with Abies cephalonica. The artificial nests will be installed in the areas recommended by the study, prior to the beginning of the breeding season in the third year of the program, thus increasing nesting site availability.

The conservation of food resources will be achieved through the preservation of old trees, as well as standing and fallen dead wood in the forest, for the three woodpecker species that feed on wood-boring insects; and through the maintenance and/or creation of appropriate open spaces and glades for Aegolius funerus.

Habitat management and conservation for Alectoris graeca will be mainly focused on the preservation and –where necessary– the upgrading of water resources for the species during the breeding season. Maintenance of selected grassland areas as an optimum feeding habitat for the species will also be carried out. The above actions will start after one or two breeding seasons of implementation of action A.9, in the second or in the third year of the project, and will be implemented for three years.

The locations of action C.8 cannot be foreseen accurately, since they will be specified by the results of action A.9. Nevertheless, all parts of action C.8 will take place within the boundaries of the site GR2440007. The methodology of the implementation will be reassessed and modified according to the monitoring results (action D.3).

The preservation of an effective population size for all target species is crucial for their survival and for the overall species diversity in the region. Action C.8, which aims at the preservation of nesting sites and food resources, will ensure the continued presence of these species in Mt. Oiti.

The population of Alectoris graeca in mainland Greece is quickly declining due to habitat deterioration/fragmentation, excessive and/or illegal hunting etc. The population of Picus canus on Mt. Oiti is the southernmost in Greece, and quite isolated from the few other populations. Dryocopus martius is a scarce resident, present at low densities wherever it occurs. Dendrocopos leucotos is more widespread but rare and very thinly distributed. Aegolius funerus has only been reported from 7 areas in Greece; its populations on Mt. Oiti and Mt. Parnassos are the southernmost and quite isolated.

Forest composition and structure determines the presence and population dynamics of woodland species. The forests on Mt Oiti used to be managed for wood production and high-volume mature and old trees were logged. So, today, many stands are even-aged and rather young, and do not provide adequate natural nesting and/or feeding sites for the target species. Dendrocopos leucotos and Picus canus are dependent on old-growth and all-aged stands; Dryocopus martius may be present in younger forest as well, provided that large trees of adequate trunk size are available. Both standing and fallen old trees are very important as a feeding habitat for the targeted woodpecker species. Improvement of their nesting/feeding habitat increases their life-long reproductive success.

The first three results are expected to influence positively the populations of the target bird species. The results are expected to become apparent during the period of monitoring (action D.4) and to be clearly evident in the long term after the end of the project. The manual for bird conservation will be available during the fifth year of the project and will be used by the staff responsible for action D.4 during the project. It will also be used by the staff of the Management Body as well as by the staff of the RST Forestry Service after the completion of the project for the long term monitoring and management of the target bird species. We expect that the manual will be also used in similar cases throughout Greece. The approximate target area for the actions is approximately 4,986 ha for the three woodpecker species; approximately 1,508 ha for Aegolius funereus; and approximately 865 ha for Alectoris graeca.

Note: It is well documented in the literature throughout Europe that the proposed actions have a positive effect on the target species. However, at this time it is very difficult to provide quantitative estimates regarding old tree protection, area of feeding habitat secured and target bird species populations. The area of old tree habitats (fallen and standing) is not precisely known, as there has been no relevant study in the site. An inventory and mapping of these is one of the main tasks of Action A.9. Similarly there is lack of recent fieldwork and knowledge for the target species, especially for Aegolius funerus for which there is only one recent record on Mt Oiti. 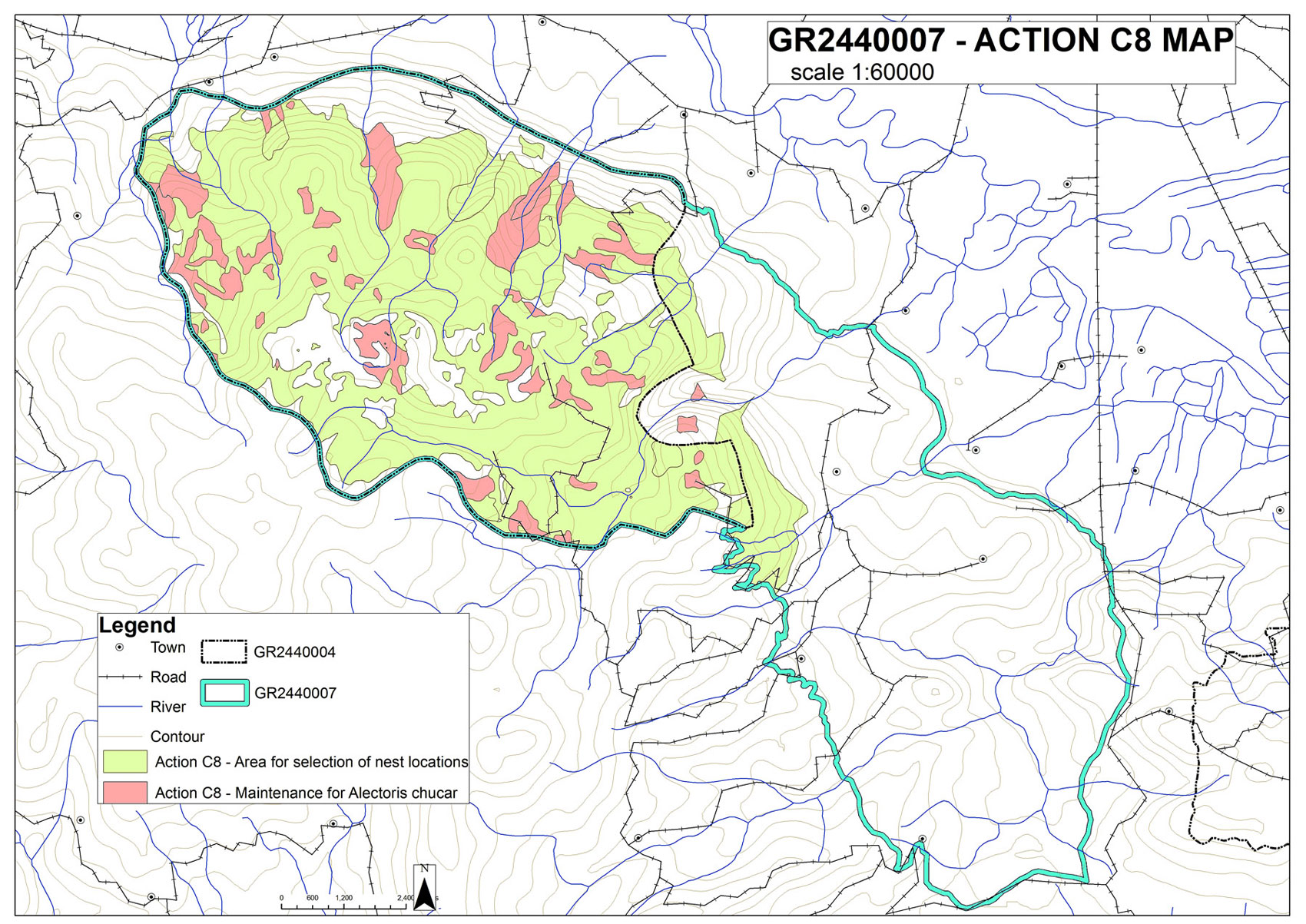