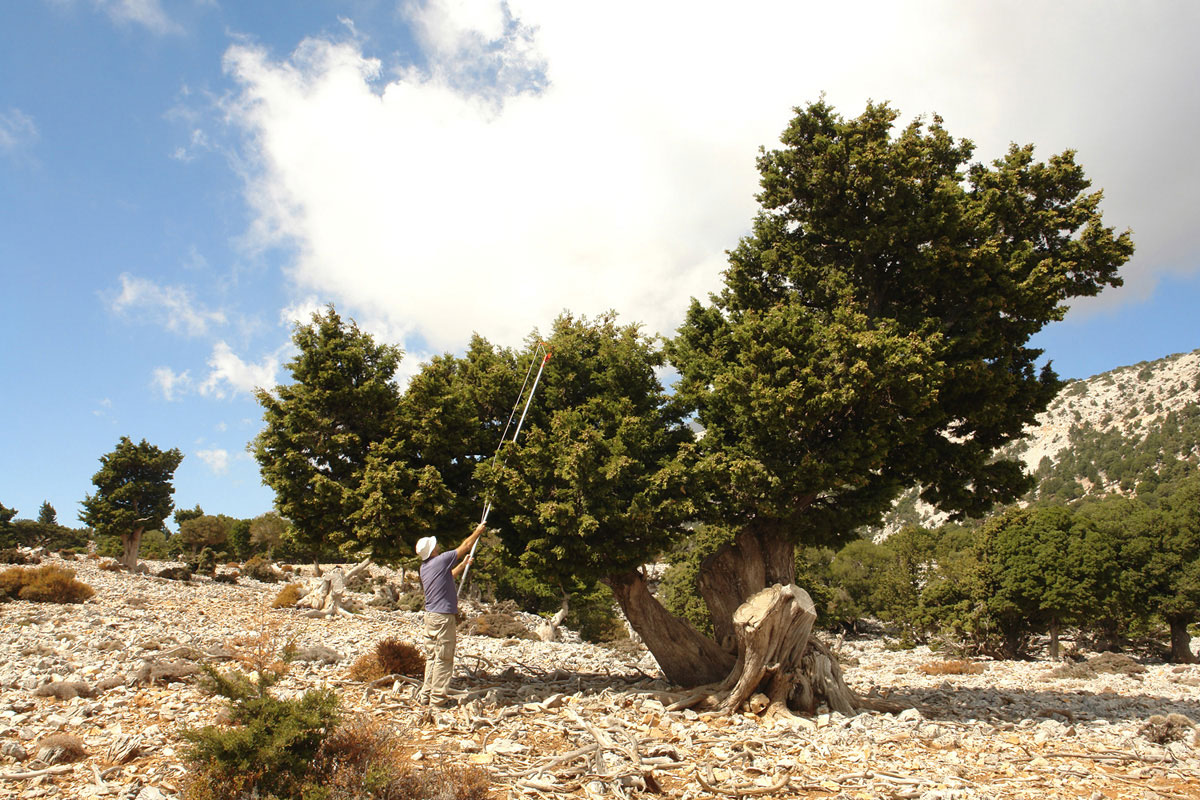 This is a pilot restoration action, aiming to improve the conservation status and increase the area of the habitat of Juniperus foetidissima forests (9560*) on Mt. Oiti. It will be implemented according to the specifications of action A.7 and will start on the second year of the project.

Juniperus foetidissima new plants will be produced at the nurseries of NAGREF, starting at the first year of the project. Production of new plants will be made by inoculation of Juniperus foetidissima grafts from local trees to high-altitude cypress (Cupressus sempervirens) plants from Kriti (where there are native wild high-altitude cypress trees) and will continue throughout the project duration. The gender of the grafts will be selected so as to ensure the necessary male-female balance, as specified by action A.7. In the first year of the project, cypress seeds will be collected and cypress plantlets grown. In the second year inoculations will be made and inoculated plants will be grown in the nursery. In the third year young Juniperus foetidissima plants will be ready for planting. Before planting, the saplings will be transferred to the Botanical Garden of the Natural History Museum of Oiti for a 6-month acclimatization to local conditions. Then, approximately 2,000 Juniperus foetidissima saplings will be planted at Greveno and some 1,000 saplings will be planted at Alykaina. The restoration will also include planting of certain keystone species (e.g., Daphne oleoides, Crataegus orientalis), the selection and quantity of which will be specified by action A.7.

Planting will be done manually at planting pits of 0.40x0.40x0.40 m3 to 0.50x0.50x0.50 m3, made either by mechanical means or manually, depending on the inclination (dimensions may be altered as specified by action A.7). The layout for planting will be according to the specifications of action A.7. Irrigation will not be necessary because the dry season in these areas is short (less than two months), and a mixture of soil and expanded perlite will ensure adequate moisture for the young plants. The planting pits will be covered with a special plastic sheet in order to prevent the development of competing vegetation and to provide better soil moisture conditions. Reformation of the planting pits to improve water retention, if necessary, and replacement of plants that may have failed will take place in the autumn of the second year after planting. Thereafter, replenishment of the plantations will be made annually, as necessary.

Detailed recording of the whole process will be made and the results will be monitored by action D.3.

It is noted that action C.5 does not intend to re-introduce a threatened species, but a threatened habitat, Juniperus foetidissima forests. It is true that this includes reinforcement and re-introduction of the population of Juniperus foetidissima which is the characteristic species of the habitat, but the whole concept is different and the guidelines do not strictly apply in this case. Nevertheless, in brief, the conditions for re-introduction (as stated in Guidelines for Applicants) are met because:

On Mt. Oiti, Juniperus foetidissima has suffered destructive human pressure because in the past its valuable rot-proof wood was used extensively in buildings and in the manufacture of agricultural tools. It is also believed that grazing and fires, especially in the past, restricted the distribution area of this habitat. In general, it is considered that habitat 9560* could have been more extended in the past on the skeletal limestone steep slopes of Mt. Oiti. This situation of 9560* with Juniperus foetidissima is similar in most, if not all, of its stations in Greece. Currently logging is illegal and of small magnitude (yet the impact is not negligible), and wild fires are not too frequent.

However, habitat 9560* is restricted to only 9 ha in Oiti and it is apparent that it cannot recover its area naturally. This may be due to the diminished regeneration potential of Juniperus foetidissima and to age-long grazing. Indeed, it is assumed that the most important threat for 9560* with Juniperus foetidissima in Greece, as well as in GR2440004, is that the natural regeneration of the species is reportedly poor to nil throughout the country. Observations of the reproductive biology of Juniperus foetidissima for several years at various stations in Greece have indicated that it maintains a very low percentage of sound seeds (< 5 %). The potential impacts of wild fires and Global Climatic Change are aggravated by the lack of regeneration. Thus, 9560* is a priority habitat type, which, although not imminently threatened in GR2440004, is vulnerable to a single destructive event such as an extensive fire, because of its small area and lack of regeneration.

Restoration, including population reinforcement and re-introduction to more locations, will improve the future prospects of this habitat. Moreover, the knowledge acquired from the pilot restoration on Mt. Oiti will be a valuable tool for similar efforts at other sites of Greece and of other European countries